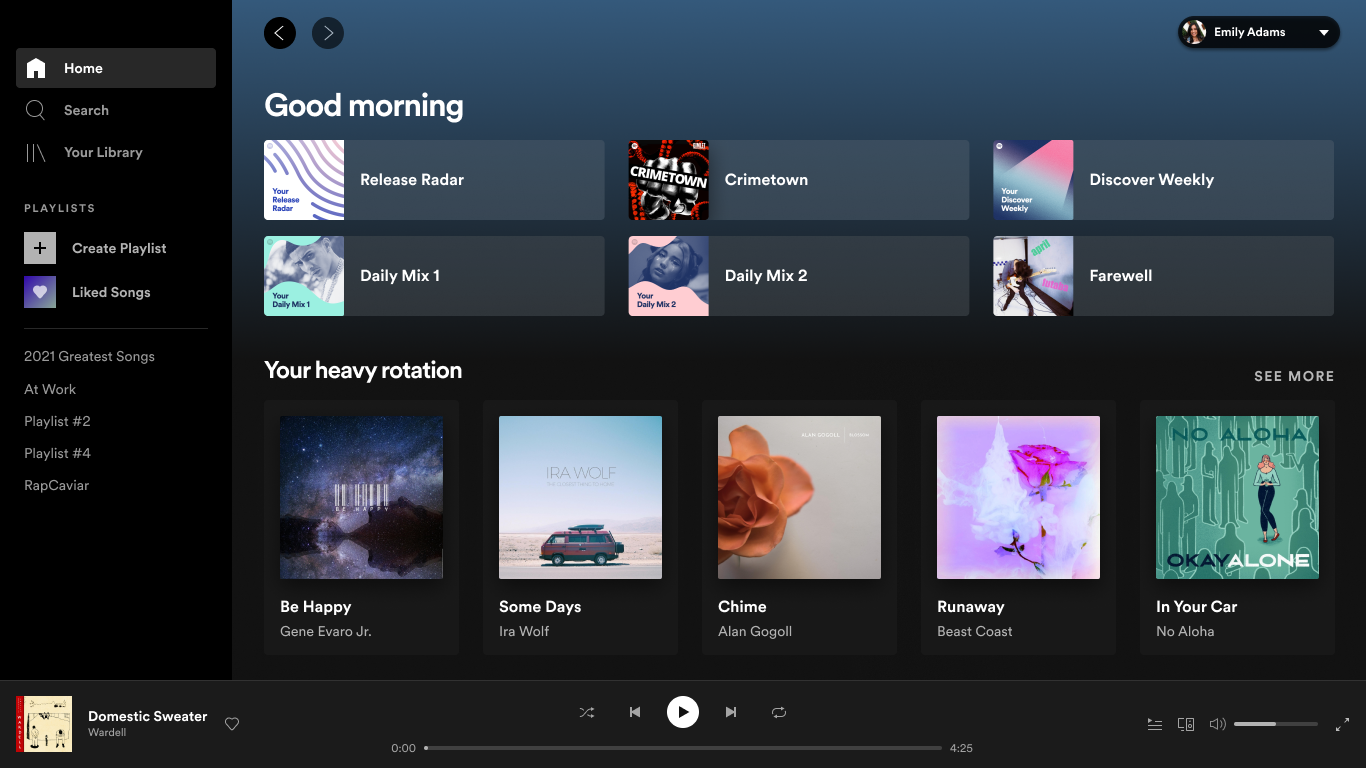 Spotify announced a new look for its desktop streaming service, with the launch of a redesigned app for Mac and Windows, as well as an updated web app. The changes, which will be available to all global users, focus on improving navigation and providing users with access to new controls and features in playlists, search, radio, library and more.

Overall, the update gives the Spotify app a more streamlined and less cluttered look and feel compared to the previous version. One notable change is that the new app removes the oddly placed search bar that was previously located at the top left of the screen. It was now moved to the reduced navigation bar on the left side, between the Home and Your library links.

The app also does not detail the various destinations within the library within this navigation bar, such as Made For You, Recently Played, Albums, Artists or Podcasts, for example. Instead, one will have to click on the Library section to see these selections.

The Your Library page will feature four categories at the top of the page, starting with Playlists, where you will find Songs You Like, Weekly Discover, Daily Mixes and Release Radar. Playlists are followed by different sections to browse podcasts, Artists and Albums.

A new drop-down menu in Your Library allows you to further sort these various sections in several ways: by Most Relevant, Recently Played, Recently Added, Alphabetically or even by a custom order that you can configure.

Meanwhile, those who like to create playlists will get new features in the updated app. They can now write descriptions, upload their own images and drag and drop tracks into existing playlists. They can also use a new built-in search bar located at the top of the “Create Playlist” page to search for new songs or even podcast episodes to add to the playlist. This could greatly speed up the somewhat tedious process of creating playlists by reducing the steps required between finding a track and putting it into a playlist.

This particular change speaks to Spotify’s growing interest in catering to curators, something co-founder and CEO Daniel Ek mentioned during his recent appearance on the PressClub program at Clubhouse. Ek explained that he was “excited about curation” because when a service’s content library grows, it needs curators.

“Playlists are amazing on Spotify, but there seems to be limited ability to interact with them, or for those playlists to really understand who’s listening to them and be able to build that second set of creators who are helping other people find content to experience,” he said.

To address this challenge, Ek said Spotify would try to add more tools to allow users to become better curators, if not on a social level, at least for themselves.

“The main focus for us on the roadmap is to enable you to be a much better curator even for yourself, for example, by suggesting content that is relevant to things you already included in the playlist,” he added. These updated playlist creation tools seem like a natural first step toward Spotify’s broader goals in this area.

Some other changes in the updated apps include a revamped listener profile page that now features both your top artists and your top songs; a new way to start a radio session for any song or artist via the more three-dot menu; and the ability to edit and view your Recently Played items in the desktop app.

Premium subscribers also get another advantage: they will be able to download music and podcasts for offline listening via a download button in the desktop application.

In a blog post announcing the changes, Spotify admitted that it had not kept up with the development of its desktop app as its service had grown, and this release is an attempt to correct that.

“At Spotify, we’re always looking for ways to provide the best possible experience for our listeners to constantly discover and enjoy music and podcasts, and that includes look, feel and functionality. We are constantly testing, developing and launching new features, optimizing for new devices and looking to expand our content offering. However, along the way, we felt that our desktop app experience hadn’t kept up and it was time for a change.”

The updated Mac, Windows and web apps were already rolled out in the last few days. Unrelated to the app redesign, Spotify separately announced that it is expanding access to its Marquee tool to promote new releases. The feature will be available to all devices in the U.S. through a new campaign management tool in Spotify for artists.