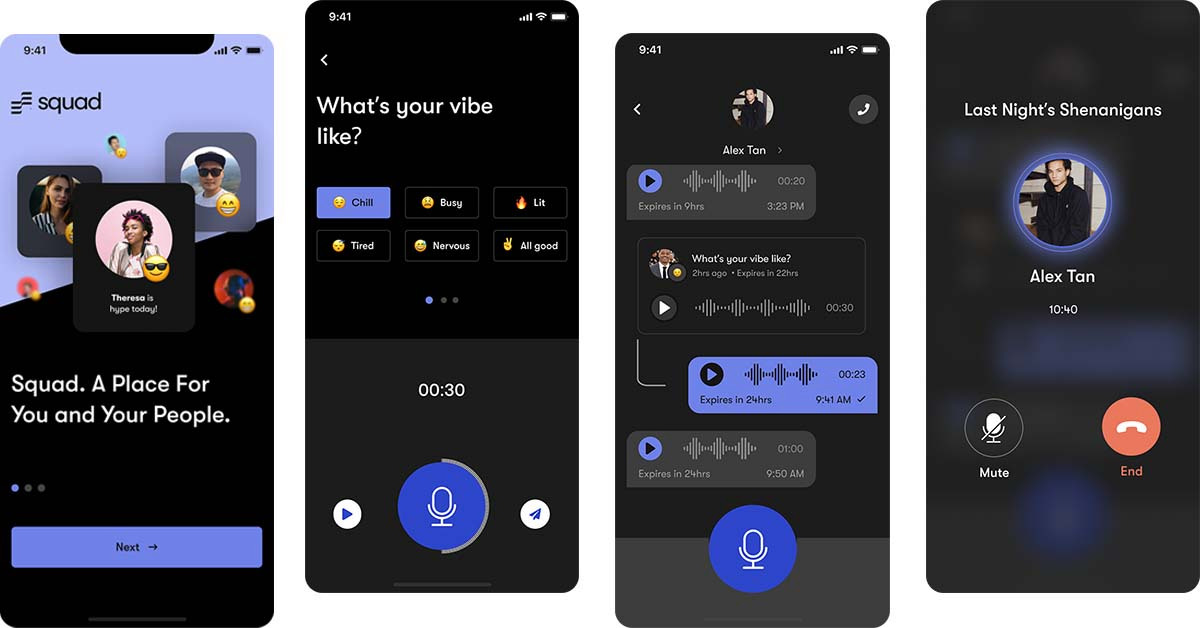 Squad used to be an app that connected people with similar interests for face-to-face meetings. However, along came the coronavirus pandemic and while most social apps thrived in these conditions, people craved digital connection more than ever, leaving Squad out of the running.

Founder Isa Watson didn’t know how long the world would be closed. Instead of waiting for it to return to normal, he completely changed the app’s scope: now Squad is relaunching an audio-based social app that aims to help users deepen their relationship with their existing circle of close friends. It’s an audio-only app, but it’s not another Clubhouse wannabe. Instead, it functions as a newsfeed of voicemail updates from your closest friends, which expires after 24 hours.

Up to 12 friends can be added to a “Squad” and, once an update is posted, members of their Squad can react with emojis or send a private voice message in response; these also expire after a day, encouraging users to be more open about what they share. Soon, Squad will support phone calls, but there is currently no functionality for group calls or group audio messages. Users can be encouraged to talk on the phone through Squad instead of a typical call and can also add a title to the call. That way, a Squad member will know why they are calling before picking up.

“There’s a big gap in the social landscape, because most of the tools are discovery platforms, broadcast platforms and personal branding platforms,” Watson said. “It’s a great opportunity for us to go in and help people maintain stronger connections with the people they enjoy the most.”

Posting a voice update feels more genuine than a curated Instagram shot or an engineered Facebook status update (and Facebook is decidedly unfashionable among Generation Z and millennials). The popularity of apps like Dispo shows that young people are responding well to ephemeral, authentic experiences on social networks. But the audio-only medium could be a tough sell for people who don’t yet send voice messages on WhatsApp or iMessage. However, while Squad’s initial launch will be domestic, there is great potential for such an app outside the U.S., where voice messaging is more popular.

“A lot of the conversations that happen in text messaging are now happening in an asynchronous audio form,” Watson added. “So we expect to continue to dig deeper into our habits.”

Watson raised a $3.5 million seed round in 2019 and revealed some tips on how to raise venture capital in Silicon Valley. “One thing investors said to me was, ‘Isa, you were talking about this shift in social media for years, and people told you that you were crazy, that social media was solved and there was nothing that could happen, ‘” Watson said. “Now, people are buying into that change.”

While Squad is not a competitor to Clubhouse, the rise of audio-only media is a good sign of the app’s ability to break through in a crowded social market. In Squad’s beta test, 87.5% of users completed the onboarding process. Still, Squad falls victim to the same accessibility issues that plague Clubhouse and many of its clones. So far, Squad does not support closed captioning, although Watson says this is something the company discussed and hopes to implement in the future. Captions could not only broaden Squad’s audience, but could also further differentiate the app from messaging giants like iMessage and WhatsApp.

Still, those who love to send voice messages in group chats may want to include their friends in Squad. Currently, the app is invite-only with a waiting list. Once you are off the waiting list, you will receive three invitations. If you post for five days in a row, you get three more invites, and if someone you invited signs up, you also add two more invites. This continues until the 12-member squad is complete.