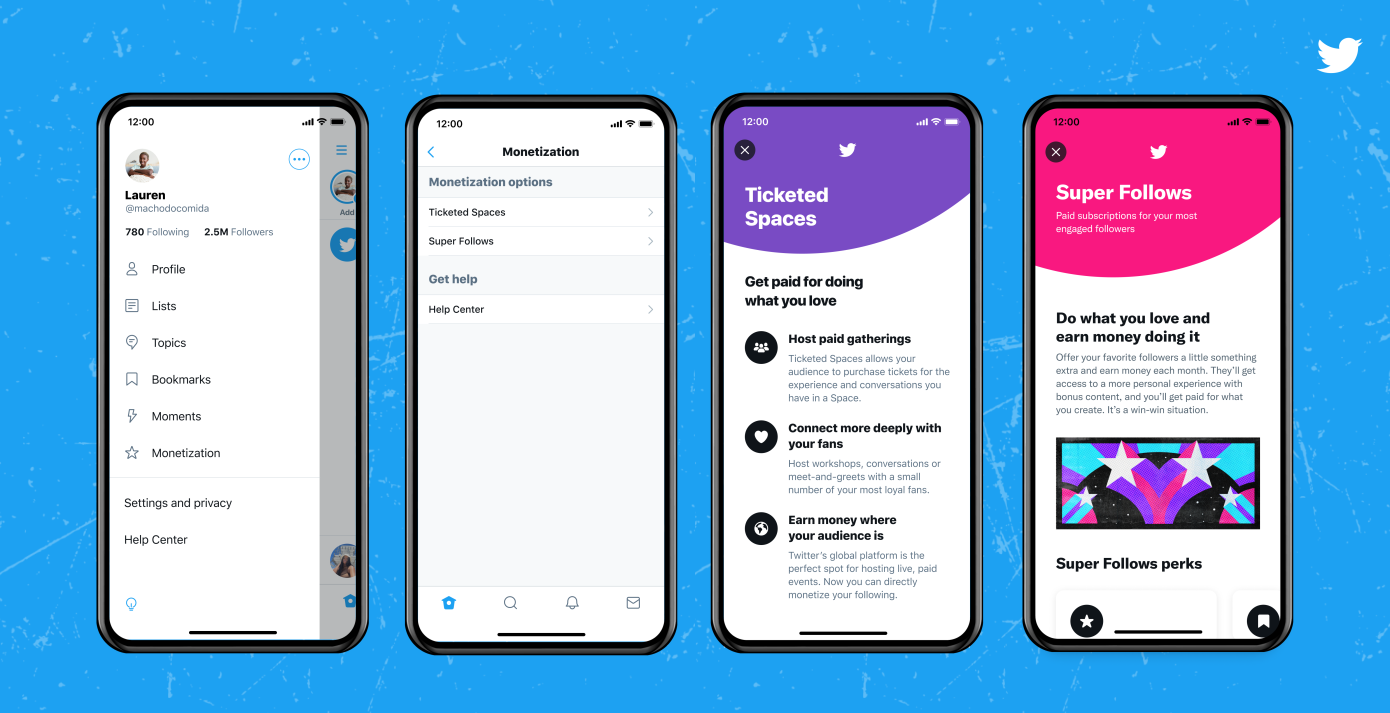 In Twitter’s latest move against unique competitors, from Clubhouse to Patreon, the company announced that it will begin rolling out Super Follows and Ticketed Spaces apps.

Twitter first introduced the Super Follows feature during an Analyst Day event in February. Super Follows allows creators to generate monthly revenue by offering paid content to followers who subscribe to them for $2.99, $4.99 or $9.99 per month. To be eligible, users over the age of 18 must have 10,000 followers and at least 25 tweets in the last 30 days.

Twitter will only take 3% of revenue from creators after in-app purchase fees, but on the App Store and Google Play, purchase fees are 30%, meaning creators will take home about two-thirds of what followers pay. Once they exceed $50,000 in lifetime earnings on Twitter, the app will take 20% of future earnings after fees.

When combined with the 30% in-app purchase fee, that leaves creators with roughly half of their followers’ payouts. Meanwhile, Patreon only takes between 5% and 12% of a creator’s earnings (it avoids in-app purchase fees as it is a web-based platform). While creators who primarily interact with their audience on Twitter can benefit from having a way to monetize without directing followers to another app, the difference in payout is stark. Creators may not abandon their existing Patreon systems for Super Follows, but at the very least, this could offer a supplemental revenue stream.

“Our goal is to elevate people by driving conversations on Twitter and help them make money,” said senior product manager Esther Crawford. “We updated our revenue share cuts after spending more time thinking about how we could support emerging voices on Twitter.”

However, ticketed venues look more promising, as Clubhouse, Spotify Greenroom and other competitors don’t yet offer similar options. Discord is testing ticketed audio events on its Stage Discovery portal, but they are not yet available. Through ticketed slots, users can set their price between $1 and $999. Creators can also limit how many tickets are sold, which could encourage someone to use the $999 ticket price for a face-to-face conversation with a celebrity. Twitter will still remind attendees that the Ticketed Space is happening via push notifications and in the app. Users over the age of 18 who have hosted three spaces in the last 30 days and have at least 1,000 followers are eligible to apply for access.

Clubhouse and Instagram have features that allow listeners to write speakers or award badges in a live audio space, but the apps do not yet allow for advance ticket sales. Another way top creators can make money from these apps is through Creator Funds. Spotify Greenroom and Clubhouse announced plans for Creator Funds, but it’s not yet clear how the earning potential will compare to selling access to Ticketed Spaces on Twitter.

The apps to use Super Follows and Ticketed Spaces are only available on mobile devices and to people in the United States. Currently, only iOS users can apply for Super Follows, but the Ticketed Spaces apps are available on both iOS and Android. Twitter is adding a new Monetization button to the app’s sidebar, where users navigate to see if they are eligible to apply to be part of the test groups for these features. These features will be rolled out more broadly in the coming months.