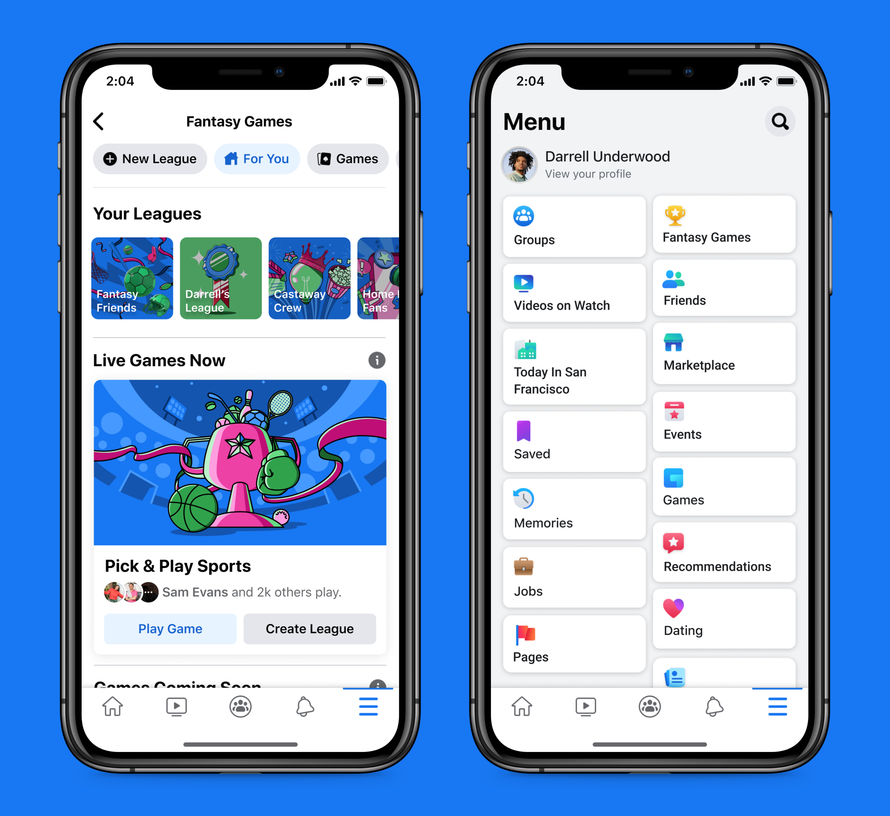 Facebook is getting into sports and other types of fantasy games. The company announced the launch of Facebook Fantasy Games in the U.S. and Canada on the app for iOS and Android. Some games are described as “simple” versions of traditional fantasy sports games already on the market, while others allow users to make predictions associated with popular TV series, such as “Survivor” or “The Bachelorette.”

The first game to launch is Pick & Play Sports, in partnership with Whistle Sports, where fans earn points for correctly predicting the winner of the big game, points scored by a top player or other events that unfold during the game. Players can also earn bonus points for building a streak of correct predictions over several days.

Other games in sports, television and pop culture will follow in the coming months, including Fantasy Survivor, where players choose a set of Castaways from the popular CBS television show to join their fantasy team, and Fantasy “The Bachelorette,” where points will be earned based on their actions and events that take place during the show. Other upcoming sports-centric games include MLB Home Run Picks, where players choose the team they think will connect the most home runs, and LaLiga Winning Streak, where fans predict the team that will win that day.

In addition to the top players appearing on the leaderboards, the games have a social component for those who want to play with friends.

Players can create their own fantasy league with friends to compete against each other or other fans, either publicly or privately. League members can compare scores and will have a place to share picks, reactions and comments. This area of the league resembles a private Facebook group in that it offers its own members-only posting box and its own dedicated feed. However, the page is designed to support groups with specific buttons to “play” or view the “leaderboard,” among others.

The addition of fantasy games could help Facebook increase the time users spend on its app at a time when the company faces significant competition in social networking, namely from TikTok. According to App Annie, the average monthly time spent per user on TikTok grew faster than other top social apps in 2020, including by 70% in the U.S., outpacing Facebook.

Facebook had dabbled with the idea of becoming a second-screen companion to live events in the past, but in a different way than sports and fantasy games. Instead, its R&D division tested Venue, which worked as a way for fans to comment on live events that were hosted on the app by well-known personalities.

The company also has several other investments in gaming, including through its cloud service on the Android web and desktop, its Games tab for streamers and its virtual reality company, Oculus.

New league games will be available in the mobile app’s bookmarks menu and in News Feed via notifications.